With the support of the BFI, Film Hub Midlands and, during the UK Lockdowns, Arts Council England, Arts Connect and BFI Film Academy, we are delighted to showcase on this page some of the work made during the second and third seasons of our Adventures with Archives project. From Winter 2019 to present day, the project has combined archive film screenings with live performance, as well as newly composed soundtracks and 'new narratives' for and with archive film.   ​

There's been lots of online activity since Spring 2020, as we've been working with young people, aged 15 to 30, across Shropshire, Stoke, and, in partnership with The Company, Birmingham. Working alongside archivists, curators, musicians, screenwriters, poets and filmmakers, they have been researching, curating and creatively responding to a wealth of archive film, including content from our regional film archive MACE, and project partners Flicks in the Sticks.

To date, the new programme of archive film works, has been screened online, at Borderlines Film Festival, at Flatpack Film Festival, and at local venues across the area. If you’d like to screen some of the work at your festival or venue, please contact us at info@mediaactive.org

Dear Future Generations
Using spoken word with selected archive footage, this short film presents an evocative and poignant reflection on the world we inherit and subsequently pass on to the future.
This film was nominated in the 'Changes for a Better World' category, at the 2022 Into Film Awards.

Rose-Tinted Glasses
Working with archive footage from the MACE Amateur Film Collections, this film deals with the loss of a loved one, and cherishes the memories shared.

Pothole and Corncockle
An amusing and quirky short film, with original script and music, takes an interplanetary perspective on human life, using footage from national and regional film archives.
Rediscovery
A guide to rediscovering the world.
Made by Jacob Rose

DearDaisie.mov
DearDaisie.mov follows a teenager who uncovers a collection of her Grandad’s old films from his career as a documentarian. Whilst assembling the footage, Daisie reads out his latest letter to her.
Made by Connie Bacharach, Aiden Baker and Rowan Copeland
Boy on The Beat
​Spoken work poem - performed live - with archive film edit, based on the challenges experienced by young Pakistani men.
​Poem written and performed by Nafeesa Hamid

Never Ending
Will humanity ever learn from our past, and break free from the cycles we seem destined to repeat, or will we continue to make the same mistakes?
Made by Esther Beckley, Amaan Modasar and Tanisha Parekh

Asians
Adapted from Enoch Powell’s speech in Wolverhampton in 1972, this hard cut film views the relationship between first generation, hardworking South East Asians and society that felt challenged by diversity and inclusion.
Made by Rajab Mohammed

Behind the scenes film (new music for archive film)

New narratives for archive film I
​- curators and creative responders, aged 20 to 28​

Life and The Bread Story

''Life' is a marriage of visual and auditory storytelling. It’s philosophical and lyrical approach aim to create an environment open to thought and reflection. A short thought exercise on one perspective of life' - Max

'The Bread Story is a thrilling retelling of one girl's descent into bread mania. Based on a true story' - Ellen

To The Dreamers and Teeth of Steel

''To The Dreamers’ uses archive footage to illustrate the journey of a girl who craves for a life full of adventure. Leaving her dead-end job behind, she takes the next train out of town and finds herself travelling the world, making lifelong friends and learning how to live life to the full' - Katie

''Teeth of Steel' is a new but familiar science fiction story about the arrival of great machines and their world-changing power, told through the re-editing of footage from Technique Film's original short of the same name from 1942' - Lenny

Spore and The Stars Are Watching

The final few audio logs of an interstellar research expedition (Genesis 21) have been found and restored. What went wrong on the newly discovered planet is not yet clear, was it what they found? Or was something else at play that led to the research expedition failing? ('Spore').

'Genesis 22' was the final research expedition that landed on the newly discovered planet. Hopefully, these audio logs will give us a much clearer understanding as to why the expedition failed; will it also shed any light on what they found on the planet? Or what happened to 'Genesis 21'? ('The Stars are Watching')

Behind the scenes film (new narratives for archive film)

'Love is All' screening at The Hive in Shrewsbury 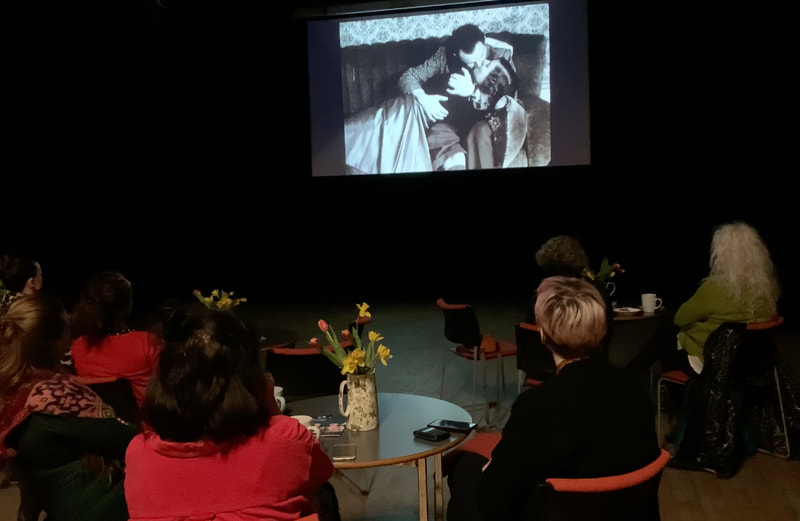 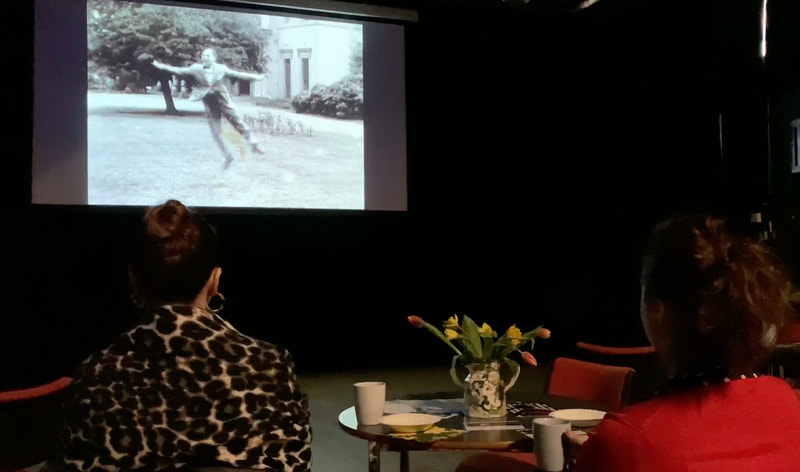 Love Is All is a documentary film exploring the depiction of love and courtship on film throughout the 20th century. It is composed of archive material from the BFI National Archive, Yorkshire Film Archive and other sources. The film is directed by Kim Longinotto with an original soundtrack composed by Sheffield singer-songwriter Richard Hawley.

As part of the Borderlines B2 festival we presented an informal evening of vintage film, new music and live performance at The Hive in Shrewsbury. We're pleased to report that our exploration of the 'weird and wonderful world of archive film, through clips unearthed and repurposed by musicians, poets and filmmakers', took place in front of a lovely appreciative audience. Photos from event will be posted here soon. Short video clips from the event can be seen on our Adventures Blog (go to the March 2020 posts) - a link to the blog can be found at the foot of this page.

Above photos: three of our wonderful performers at the Hidden Treasures event, March 2020.

Hidden Treasures flyer (front and back)

​The wonderful Shropshire-based poet Jean Atkin wrote two new poems for our 'Hidden Treasures' event, one of these was inspired by archive footage of pioneering English aviator Amy Johnson gliding over the Shropshire Hills (see the first film below). You can read the poems on our Adventures blog - see link below the two short films.

Read the poems, and watch Jean perform Aviatrix live - at our Hidden Treasures  event - on our blog - select the images below 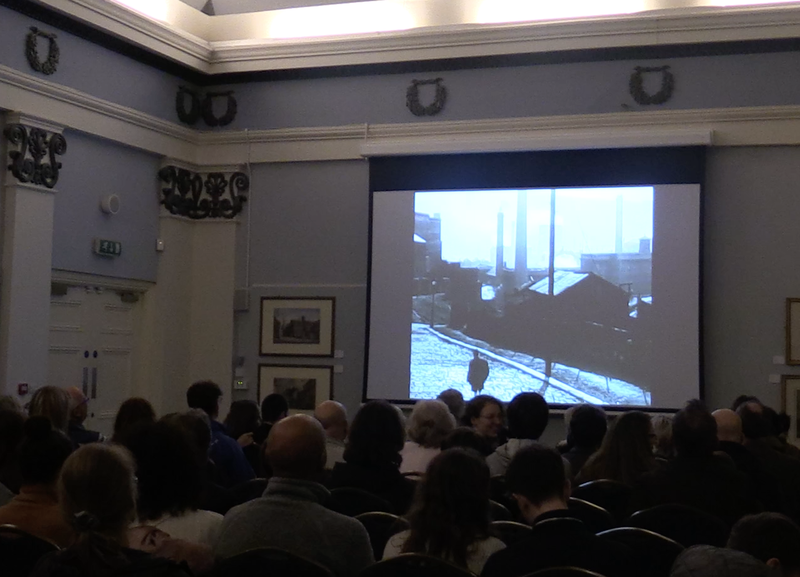 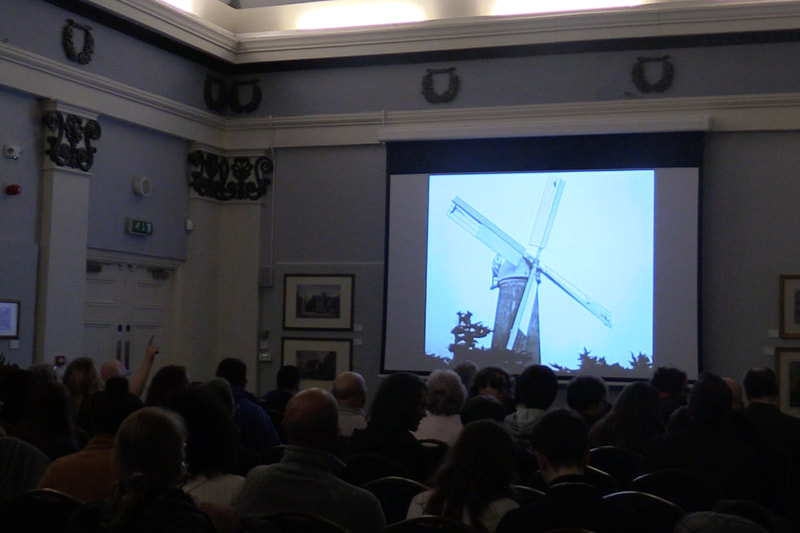 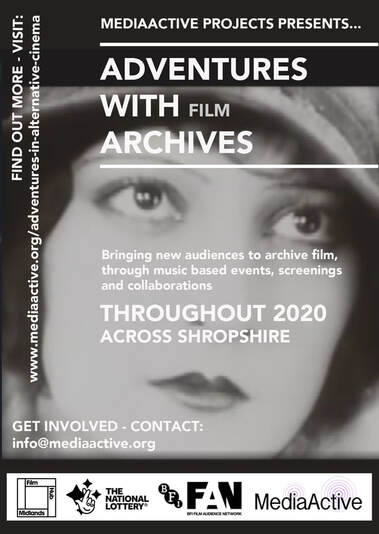