In celebration of our film heritage programme Adventures with Archives, we are now offering, for a time limited period, a new programme of archive film based works for screening in your venue -  free of charge.

Cinema audiences have delighted in the exploration of the weird and wonderful world of archive film, through these Hidden Treasures. Curators, archivists, musicians, poets, and filmmakers have collaborated to repurpose archive footage with contemporary audiences in mind, bringing new narratives, new music and new experiences to both established and new film audiences.

Thanks to BFI Film Hub Midlands, we can provide the films for screening free of charge to Film Hub members. Films are available in MP4 and DCP formats, or on a DVD.

The films are available for you to view here. ​

​Select the image below to find out more about each of the films in our Hidden Treasures Progamme, and take a look at the full programme below... 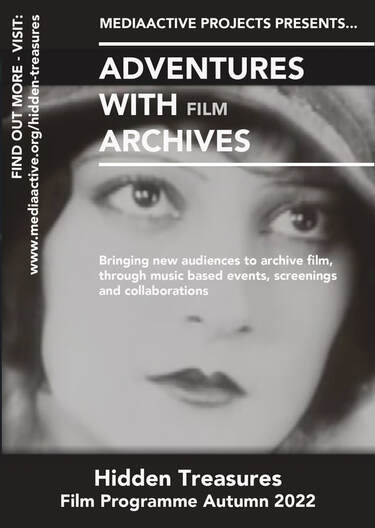 Using spoken word with selected archive footage, this short film presents an evocative and poignant reflection on the world we inherit and subsequently pass on to the future.  This film was nominated in the 'Changes for a Better World' category, at the 2022 Into Film Awards.

A guide to rediscovering the world.
To The Dreamers
Running Time: 4 minutes, 42 seconds

'To The Dreamers’ uses archive footage to illustrate the journey of a girl who craves for a life full of adventure. Leaving her dead-end job behind, she takes the next train out of town and finds herself travelling the world, making lifelong friends and learning how to live life to the full.

The Shropshire-based poet Jean Atkin composed two new poems for an Adventures with Archives live event: Aviatrix and Chorley Flat Iron Market. Aviatrix was inspired by archive footage of pioneering English aviator Amy Johnson gliding over the Shropshire Hills (Amy can be seen in the first one and half minutes of this short film).
Grandad’s Camera
Running Time: 3 minutes, 53 seconds

In collaboration with campaigning organisation SAND (Safer Ageing No Discrimination), the artist Dea Paradisos worked with members of the LGBTQ+ community. Face to face sessions were just about to start when the pandemic hit, and so Dea, with the technical support of Richard Benjamin, moved the sessions online. The 1995 film The Celluloid Closet was used a springboard for discussion about on-screen representation of the LGBTQ+ community. The resulting film, made by the group, includes excerpts of the captured conversation which serve as the soundtrack to a film, whilst archive footage illustrates the discussion. ​