​This page shows an array of artworks made by young people as a response to the history of the air services during World War I, and the subsequent birth of the RAF in 1918.

The works recognise the courage and skills of those early pilots, who served their country not only during wartime, but also as champions of flight technology and civil aviation.

Using a variety of approaches, including film and animation, over 50 young people aged 10 to 22 years, and participating in their own time, have created high quality, accessible and engaging artworks.

Working with artists and filmmakers, with RAF veterans and their families, and with flight specialists, archives and museums, the young creatives have uncovered some of the hidden stories of those early pioneers of flight - from World War I trainee pilot to post war Flying Circus showman, and beyond.
Champions of Flight has been supported by a grant from the Heritage Lottery Fund.

A selection of work produced through the Champions of Flight project is on display at the RAF Museum Cosford – the exhibition also includes a screen installed alongside the World War 1 planes in the Museum's ‘War in the Air’ hangar. The work will be on display at the museum throughout the Summer until 2nd September 2018. However, the screen in the  ‘War in the Air’ hangar will remain on display until the end of the year. RAF Museum Cosford is open 7 days a week from 10.00am to 5.00pm (last entry 4.00pm).
​

Throughout 2018, and as part of Wilfred Owen 100 (a series of events commemorating the centenary of Shropshire poet Wilfred Owen’s death), the Champions of Flight project exhibition, along with some work from our earlier WW1 project*, will tour across a number of venues in Shropshire. Following on from the exhibition at RAF Museum Cosford (see above for details), the exhibition will tour to Wem Town Hall from Thursday 20th September to Saturday 27th October, and Whitchurch Heritage Centre from Thursday 8th November to Friday 7th December 2018​.
​
*you can find out more Eyewitness 2014-16 by visiting our webpage at mediaactive.org/eyewitness or by visiting the website produced as part of the project at www.eyewitnessww1.co.uk

This short film was made by a team of twenty young people, who were also developing filmmaking skills as part of BFI Film Academy at MediaActive. Inspired by the anecdotes of WW1 pilots who went on to perform, alongside of female wing walkers in aerial display teams (aka Flying Circuses), the young people, aged 16 to 18 years, wanted to create a film that both reflected upon the horror of war,  as well as the post-war years of thrill seeking entertainment.

By adopting a weird and wonderful music video aesthetic, they hoped to capture the interest and imagination of other young people, connecting them to history that encompasses both military and civil aviation.

A short but evocative animation that illustrates the troubled mind of a wounded World War I pilot.
​

'Camels in the Sky'

This silhouette animation depicts the celebrated Sopwith Camel in flight. A spritely plane capable of elegant manoeuvring during battle, it was also a favourite for complex acrobatic displays in post war flying circuses.

'The Birth of the Fighter Plane'

Working from archive materials, this short film tells the story of French World War I pilot Roland Georges Garros and Dutch aircraft manufacturer "Anthony" Fokker, and their role in the development of the synchronization device which enabled World War I aircraft to fire through the spinning propeller.​

Accompanied by animated digital drawings - using the Procreate App on an iPad - Warren Hastings tells the story of his Uncle, Wing Commander Harry Hastings, and an unfortunate accident with a green smoke canister.

'Attack of the Zeppelin'

Using the simple ‘cut and shove’ animation technique, a group of young people from RAF Cosford Airplay have depicted the true story of a Zeppelin raid on London in 1915. Working from first hand accounts written by boys aged 5 to 14 years attending Princeton Street Elementary School in London, on the morning after the air raid.

Marking the centenary of the RAF in 2018, this very short, but pithy, animation tells the incredible story of Pilot Grahame Donald (later Air Marshal Sir David Grahame Donald), who, in 1917, fell from his Sopwith Camel at 6,000 feet and serendipitously survived. That is, whilst attempting to fly his plane up and over, as he reached the top of his loop, hanging upside down, his safety belt snapped and he fell out. He was not wearing a parachute as a matter of policy. Incredibly, the plane had continued its loop downwards, and Donald landed on its top wing. Climbing back into the cockpit Donald then executed ‘an unusually good landing’.

This short animation tells the story of Bloody April, the name given to the, largely unsuccessful, British air support operations during the Battle of Arras in April 1917. During this battle the Royal Flying Corps experienced particularly heavy casualties at the hands of the German Luftstreitkräfte.  The original, and remarkable, words to this piece can viewed in full below (under print-based works).

'Flying With My Father'

Using footage filmed in Summer 2017, in such a way as to suggest the use of vintage film stock, this work seeks to share insight into how it might have felt for those young first time flyers that took to the air in small planes as trainee pilots in World War I.

Young people first interviewed a Shropshire school teacher about his first experience of flying with his father, and then visited and filmed at Sleap Airfield and museum, in North Shropshire. Sleap was a World War II RAF base, and today is well used by aviation enthusiasts, and pilots of small planes that are similar in size to the World War I biplanes.

A group of young people visited Whitchurch Heritage Centre and met with some of the centre’s volunteers who showed them WW1 artefacts from their collection.

Thank you to the volunteers, for sharing their knowledge and anecdotes with us on camera.

Print-based works created through the project 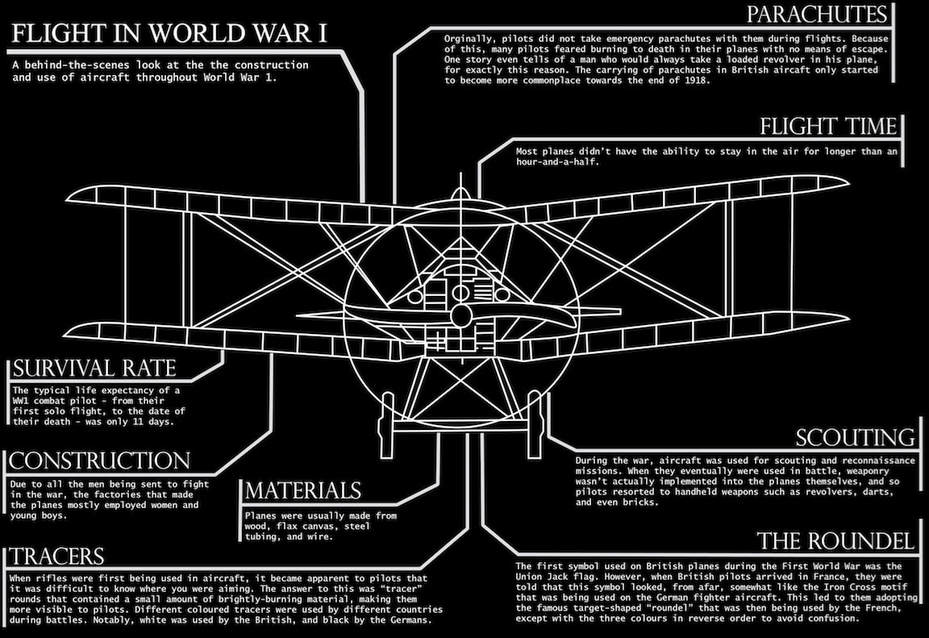 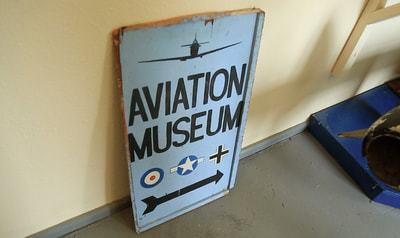 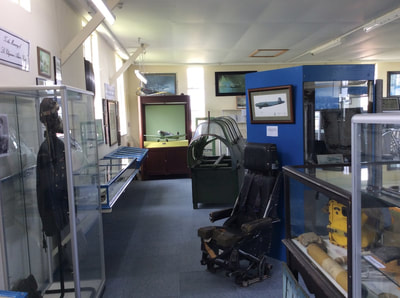 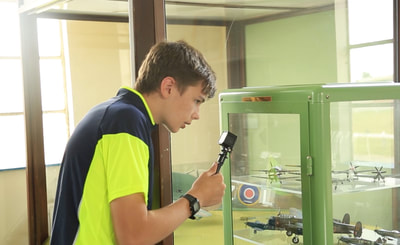 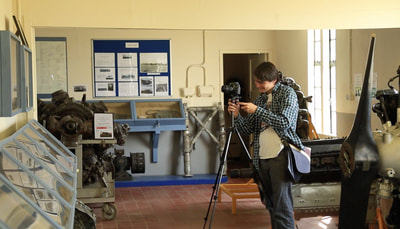 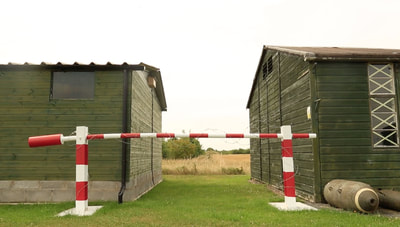 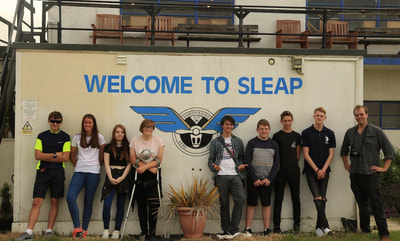 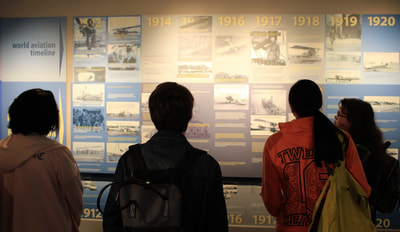 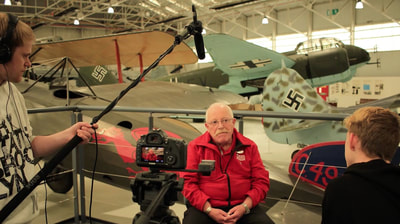 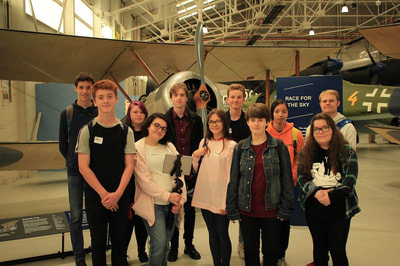 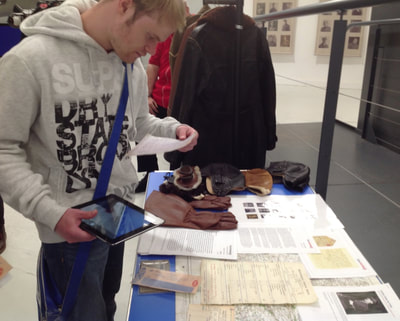 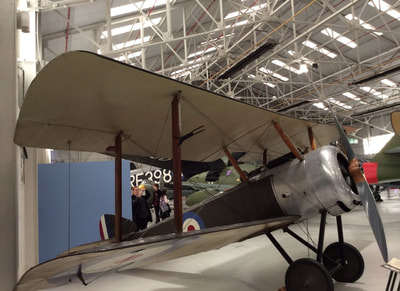 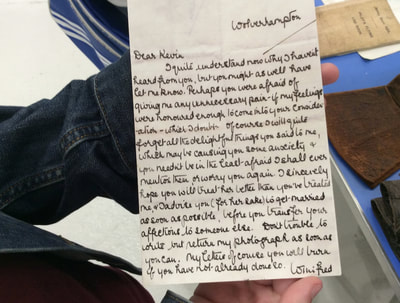 Visit to Otherton Airfield to film a replica SE5A 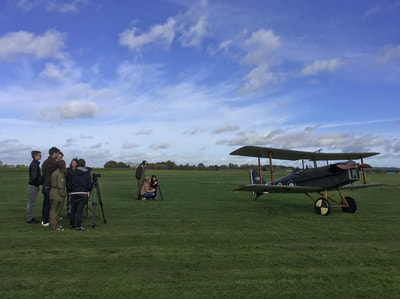 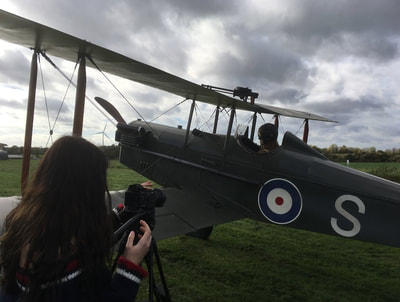 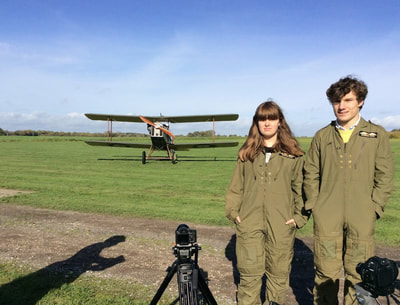 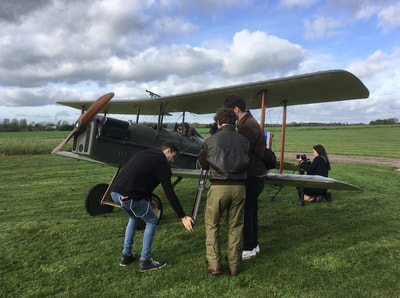 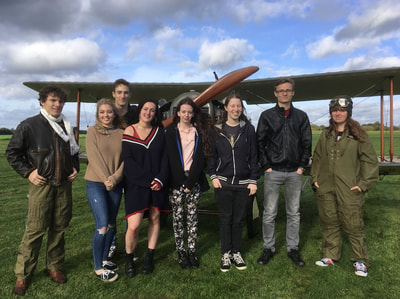 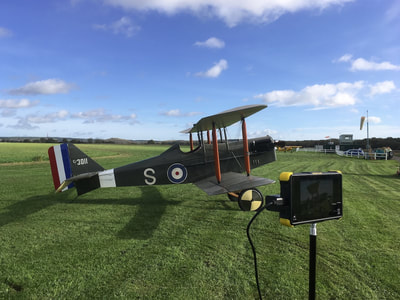 The MediaActive Team would like to thank Peter Davies - the owner of the replica SE5A pictured above - for being such at wonderful host at Otherton Airfield, and for providing our young production team with such an inspiring and unique experience, and rare opportunity, to get up close to a WWI biplane. 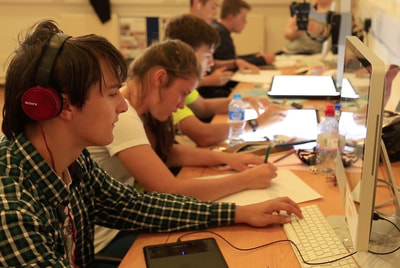 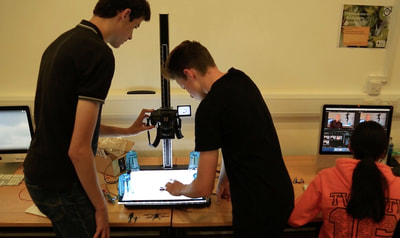 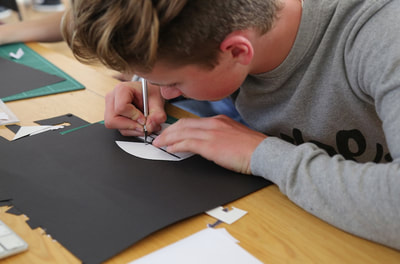 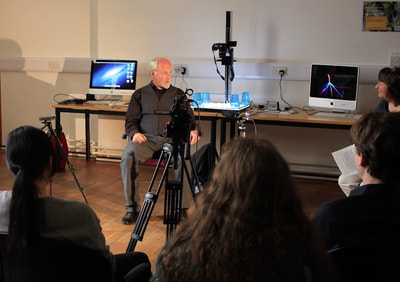 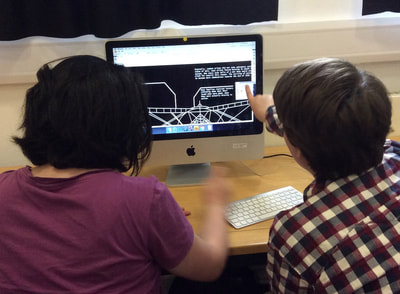 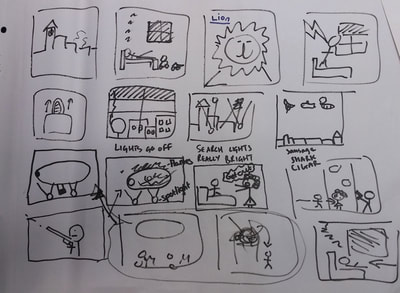 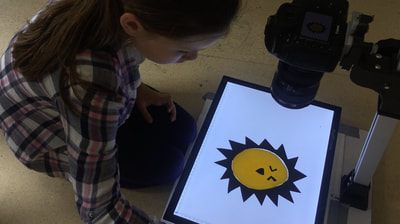 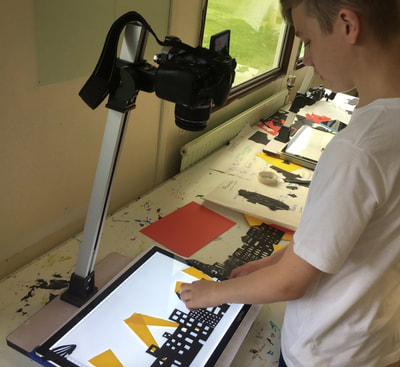 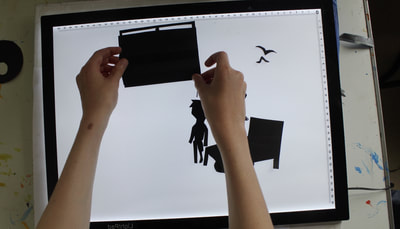 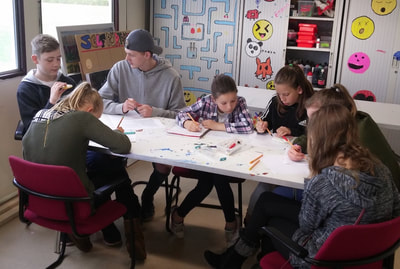 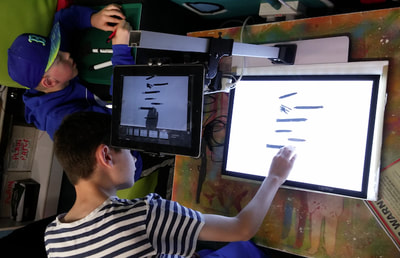 Eyewitness - Champions of Flight Exhibition
front cover of the four-page exhibition guide produced for the exhibition at Theatre Severn;
some exhibition photos and a video showing animations installed on two small screens

'Come Josephine In My Flying Machine' performed by The Orchard Singers

Champions of Flight - 'behind the scenes' film